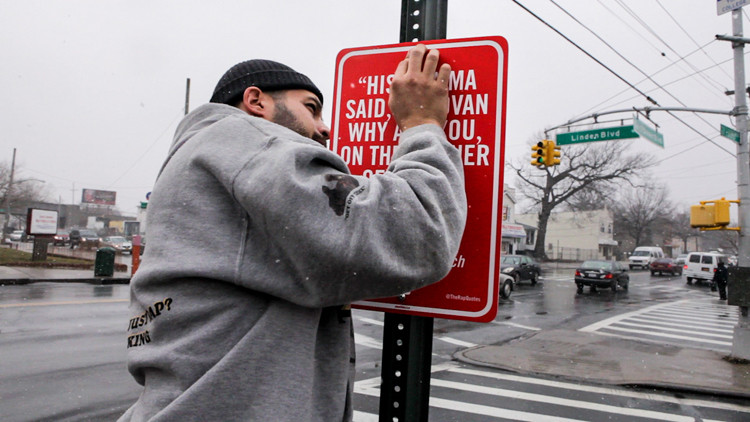 Artist Jay Shells has wandered around New York, putting up signs with rap lyrics at the specific places the songs referred to in the songs, creating a new map of the city based on its homegrown art form. Fastcoexist Every city street tells a story. It happens that in New York City’s case, many of those tales have been told through hip-hop. New York geography is a veritable atlas of rap-song references; but other than real hip hop heads, no one’s paying attention.

Graphic designer and urban interventionist Jay Shells decided that New York City locations, memorialized in rap songs by the likes of Mos Def, Nas, or Jay-Z, should get the recognition they’re due. His guerrilla signage project has installed official-looking signs with rap lyrics at the exact locations referenced. “Cause I want to be on 106 and Park pushing a Benz,” rapped Kanye West. Now, a sign says as much, posted at, you guessed it, the intersection of Park Avenue and 106th St. (the Harlem location where BET once had a studio). Fastcoexist Other signs denote the Marcy Houses, where Jay-Z grew up (and rapped about), and, the subway line on which KRS One rhymed about throwing back Olde English, and Carnegie Hall, where Busta Rhymes said he’d bring “street corner” culture. (He hasn’t succeeded yet, but Jay-Z has.)

Animal New York documented Shell’s efforts to post the signs: 30 in all. Check it out here. In the past, Shell made a name for himself with a series of posters describing proper subway etiquette (don’t clip your nail, eat or play loud music) designed to look like actual MTA announcements. It’ll be interesting to see whether his signs are embraced by city officials or torn down. Fastcoexist